CBP officers in Cincinnati detained two parcels heading to a residence in West Palm Beach, Florida. CBP officers inspected the parcels to determine the admissibility of its contents in accordance with CBP regulations.

On the same night, officers in Louisville were inspecting different parcels to determine their admissibility. A shipment arriving from same location in Hong Kong and heading to the same residence in West Palm Beach, Florida as Cincinnati’s parcel, was inspected and found to contain 401 Cartier rings and bracelets.

“This is a significant seizure for CBP, but unfortunately, CBP officers see counterfeit shipments like this every day,” said Richard Gillespie, Port Director-Cincinnati. “I’m extremely proud of these officers determination in stopping illicit shipments, and our commitment to protecting the American economy.”

“Driven by the rise in E-commerce, the market for counterfeit goods in the United States has shifted in recent years from one in which consumers often knowingly purchased counterfeits to one in which counterfeiters try to deceive consumers into buying goods they believe are authentic,” said Thomas Mahn, Port Director-Louisville.. Consumers are unaware that they’re buying a dangerous product as the counterfeit is just that good.” 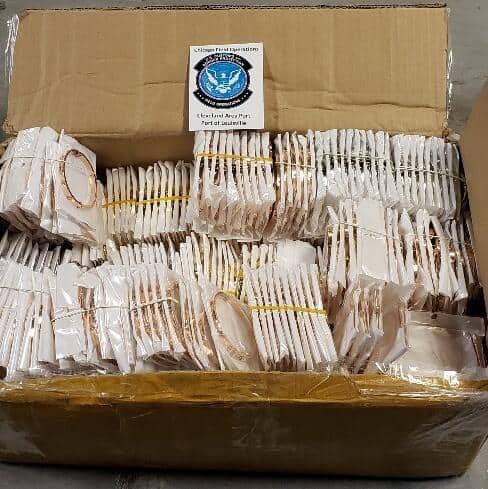 U.S. Customs and Border Protection (CBP) has the authority to detain, seize, forfeit, and ultimately destroy merchandise seeking entry into the United States if it bears an infringing trademark or copyright that has been registered with the U.S. Patent and Trademark Office (USPTO) or the U.S. Copyright Office (USCOP), and has subsequently been recorded with CBP. As an intellectual property right (IPR) owner, you can partner with CBP to receive border enforcement of your registered trademarks and copyrights through CBP’s e-Recordation Program.  There are several steps an IPR owner can take to ensure their trademarks and copyrights are enforced at all U.S. Ports of Entry.

Every year, CBP seizes millions of counterfeit goods from countries around the world as part of its mission to protect U.S. businesses and consumers. These goods include fake versions of popular products, such as smartphones and related accessories, electronics, apparel, shoes, cosmetics, and high-end luxury goods, as well as goods posing significant health and safety concerns, such as counterfeit pharmaceuticals, bicycle and motorcycle helmets, medical devices, supplements and other consumables. Sold online and in stores, counterfeit goods hurt the U.S. economy, cost Americans their jobs, threaten consumer health and safety, and fund criminal activity. Visit the National IPR Coordination Center for more information about IPR including counterfeiting and piracy.

Nationwide in Fiscal Year 2020, CBP seized 26,503 shipments containing goods that violated intellectual property rights. The total estimated value of the seized goods, had they been genuine, was nearly $1.3 billion. CBP has established an educational initiative to raise consumer awareness about the consequences and dangers that are often associated with the purchase of counterfeit and pirated goods. Information about the Truth Behind Counterfeits public awareness campaign can be found at https://www.cbp.gov/FakeGoodsRealDangers.

U.S. Customs and Border Protection is the unified border agency within the Department of Homeland Security charged with the management, control and protection of our nation’s borders at and between official ports of entry. CBP is charged with securing the borders of the United States while enforcing hundreds of laws and facilitating lawful trade and travel.