PHOENIX — Authorities in Arizona on Friday announced the arrests of 37 people in connection with large-scale child sex crimes and human trafficking operations.

The multi-agency sting, called “Operation Broken Hearts,” caught men and women between the ages of 21 and 66, KSAZ reported. Many of those arrested live in the Phoenix area. 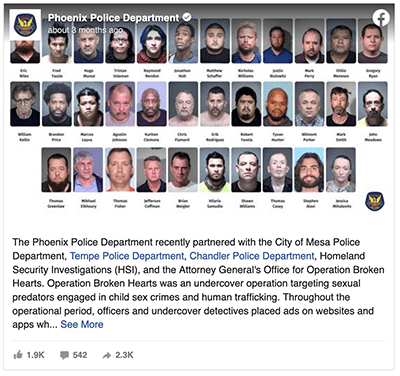 “Throughout the operational period, officers and undercover detectives placed ads on websites and apps which are commonly sought out by suspects seeking illegal sex acts with children,” the Phoenix Police Department said in a statement.

Those arrested are accused of soliciting and/or brokering deals for various sex acts, KNXV reported.